It was a smashing success.

I dug up some old film cameras, one of which my grandfather gave me a while back and an old Polaroid camera. I’ve had both of these for quite some time but had never used them as props – I even twice brought the Polaroid on my recent shoots in Boston and forgot to use it both times! But, I found the perfect spot to whip these two cameras out.

A while back, my mother drove past an old red barn-style house in my hometown and noticed an old, 50’s style car sitting out front. She told me about the house and said it would be interesting to do a shoot there sometime! I check it out by myself and sure enough, I had fun shooting without anybody around. I explored the area a bit more and decided this area would be super fun to shoot. Cue the old cameras.

I’m not sure if these actually work or not…which is strange, since I obviously have them in my possession, but honestly, I think shooting on film cameras would be a fun experiment. The only aspect I’m not a fan of is buying the film, especially for these cameras. Film is more and more outdated and the cost to purchase film is rising, especially for old cameras like these. But, I do like the process of creating a film image. 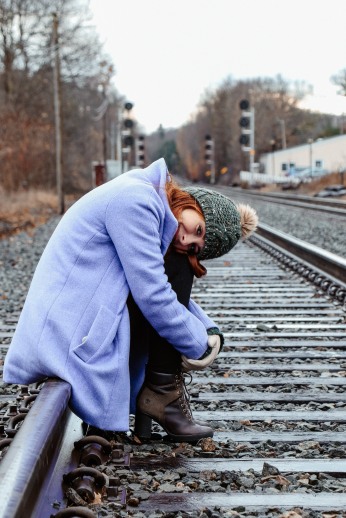 Waitin’ for the train. 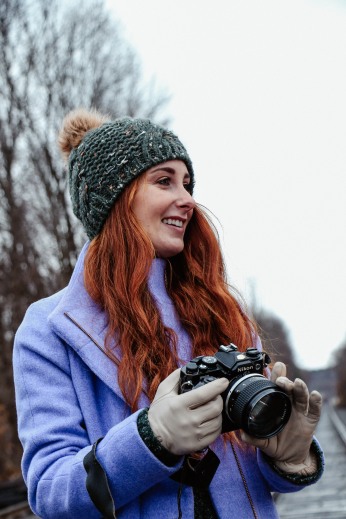 Know what’s funny, actually? This little location kept me and Kate occupied for over an hour and a half – maybe more like two hours! We worked in a space that probably spanned…let’s say one hundred feet wide and fifty feet long, five thousand square feet (is my math okay, I haven’t taken a math class in years…). Kinda crazy! That may partially be because we heard a train horn early on and wanted to see if we could catch a glimpse of it – and shoot with it, of course. But, it was also a really sweet area to shoot. 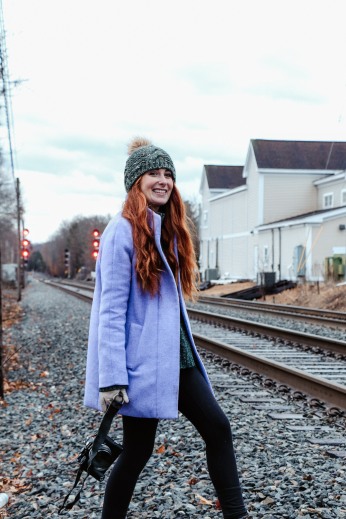 You see, I have a photography book that lists numerous exercises for photographers to do and I have bookmarked it like crazy – one in particular is to stay in a confined area and shoot as many unique shots as possible. It actually said to stay in one particular spot (basically a two-foot square area) and see how much you can shoot, but I cheated a little and broadened that space by a fair bit. Oh well. 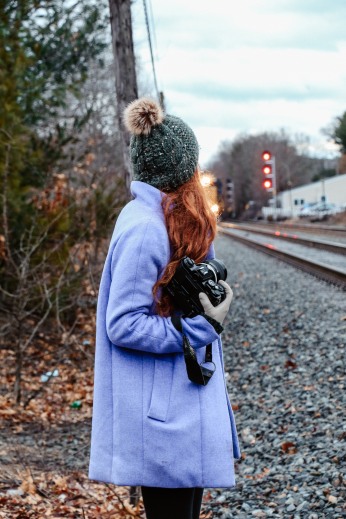 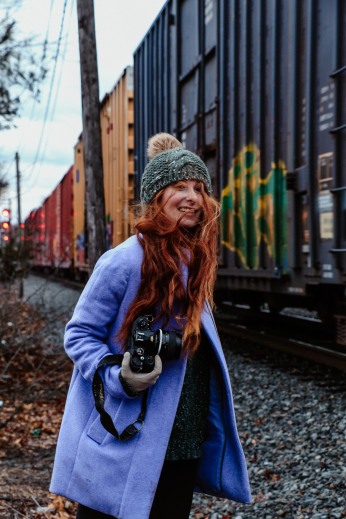 Now, I’ve never been this close to a train before, and with my knee still recovering, I was probably a little too close. I don’t know if any of you are familiar with the phrase “hit like a brick wall” or “hit like a train” but the rushing wind the train creates when it passes is very powerful! I was honestly surprised when I lost my footing a little bit. I waved hello to the conductor who waved back and then wham, the cold wind from the train hit my face and sent chills down my spine and tingles through my body. I quickly remembered to snap some photos. 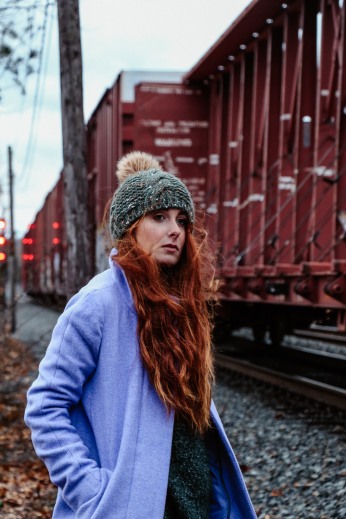 The train came and went and our mission was complete. It was a nice long freight train too, allowing us to capture a bunch of different shots in a short amount of time. We had moved back and forth between this clearing with power lines running through and headed back there. It’s crazy that all of this is located right next to each other but looks like two completely different locations, miles apart perhaps. I’m a sucker for depth and I was absolutely able to achieve that here. 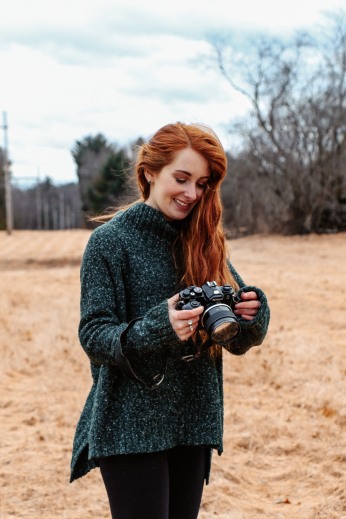 She liked this camera better.

I could keep posting those photos and probably will somewhere, eventually. We finally moved down to the river flowing next to this field. Again, there were so many unique locations just within a small, confined area. I was loving the convenience! I need to challenge myself more like this in the future because it really makes all the difference in the end.

And so, the first shoot of 2019 ended. I hadn’t touched my camera since the 29th of December. I think that was a much needed break. Oh, and my knee was also a bit busted as well (it’s getting better, don’t you worry). And look, this blog is timely, too! Sticking to my resolution to put out timely blogs. I’ll probably give myself 48 hours to write the blog once the shoot is finished in order to keep with my quick turnaround and stay on time.

We’ll see if that actually happens.

Next blog: One final blog in Newburyport and that’ll close out Massachusetts for a bit. I’m headed back to Buffalo for my last semester of college. Oh yes, I’m excited.

One thought on “The First Shoot”