I can’t remember my first camera. I remember going through a bunch of small, point and shoot cameras when I was much younger and, of course, those older yellow cameras, the old Kodak FunSaver 35mm cameras with film. I just bought my first camera in mid-February (actually on Valentine’s Day…) and it’s been a whirlwind using it! I absolutely love it and I am excited to finally own a camera.

I’ve gotten a lot of questions about photography and how to create portraits.

“What are my secrets?”

“What are your settings?”

“How do you pose people?”

The questions go on and on. I’ve actually had two friends of friends reach out to me and ask me about portraits and I am in the midst of teaching both of them through video calls! I created a “lesson” plan in my notebook and keep adding to it. I figured I’d share some things I’ve learned along the way! This includes some beginner level tips as well as a few intermediate tips.

Make sure your camera is set to “Manual” mode – there’s an ‘m’ on every DSLR dial switch. Set your aperture first and work the shutter speed and ISO around the aperture. Seriously! I like to have my aperture set to f/2.8, and, if possible, f/2.0 or f/1.8. I adjust my shutter speed accordingly to expose the photo properly, and keep my ISO as low as possible, usually at ISO 100 or 125. If you don’t have a lens that goes down to those apertures, not to worry. The two common kit lenses for Canon cameras are 18-55mm or 18-135mm. Both of these have variable f/stop settings (f/3.5 – f/5.6). All this means is when zooming in from 18 millimeters to 55 millimeters and beyond, the aperture is automatically adjusted higher. When using an 18-135mm lens, I like to set my aperture to f/5.6. Zooming in to 50mm or beyond will naturally create a soft background and will separate your subject from the background. Unfortunately, you might have to hike your ISO up and your shutter speed down, but sometimes, sacrifices need to be made! 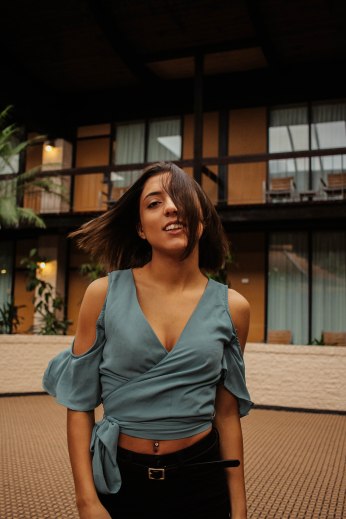 Now, what makes the above photos work so well? The lighting. It’s all natural. I didn’t use flash or any external lighting for either of those shots. Except for night photos or photos in low light, I rarely use external lighting. I like to shoot primarily outdoors, so lighting is always supreme. However, as shown above, both photos were shot indoors. I made sure with Lexy, on the left, to put her by a window and allow for maximum exposure to light. When positioning Maddie, on the right, I had a bit of an advantage because the entire roof was windows, allowing for the midday sun to shine through. This technique also works for dramatically light portraits as shown below.

Positioned by a window.

In five of the six photos shown above, good depth management is present. Not so much on the dramatically lit shot of Lexy, but that’s an entity on it’s own. Let’s take an example of two photos I did with Lexy at Hotel Henry. The long hallways there provide for amazing depth, making it feel fuller. This is much better shown than explained, so let’s see the results real quick.

Little to no depth.

This is a rule I made up and named and if other photographers do it as well, good for them! I can’t remember when I learned this. Perhaps it was from another photographer or I was watching video, but I’m glad I did it! The “180 Rule” is simple: move around your subject in a 180 degree half-circle.

Position the person in one spot, and take 12-15 photos, stepping left and right, forwards and backwards until you’ve created a complete 180 degree half-circle (or as much as you can). This gets you moving in different directions and gives you a completely different feel photo to photo. In the below examples, I was positioned directly in front of Maddie for the left photo. I wanted to get a completely different look for a creative photo, so I moved to my left (her right) and the change in degrees was about 90 degrees. This change creates two photos that feel very different.

Shooting 90 degrees to her right.

Extreme closeup, Medium closeup, closeup, wide, extreme wide, etc. You might have heard of these terms if you’ve taken a film class! The same rules apply to photography, both portrait and landscape. Different focal lengths and distances from the subject convey different emotions for the viewer. Some photos require a more intimate setting, and a closeup will command that attention. Other times you may be in a position where you want the scenery to show through, so a wide or medium wide shot is called upon. It all depends on what type of shooter you are, location, and most of all, preference. I prefer to show as much of the background as I can, so I usually shoot wider, at 24mm or 35mm. If I use a longer lens, I’ll typically move further from the subject. Here are some examples! Well, that brings us to the end of Tips on Tuesday – I know, it was a long one, but I hope for the few of you who read it fully, you learned a thing or two! I have more points I want to include but after I started writing the first two points, I thought it best to split it up into multiple blogs. That leaves more for another blog!

I’ll see you next time.

One thought on “TIPS-ON-TUESDAY: 5 Photography Tips to Create Better Portraits”