It started with a Bahd tag.

No, I didn’t spell that wrong.

It’s a clothing company; I’ll link their story here and at the end of the blog! Long story short, Kay Bahd is a Canadian apparel company out of Ontario and one of my best friends, Kaila, entered their giveaway on Instagram and tagged me! I thought it was funny, and offered to shoot the product if she won. I’ve only ever had one other friend win a giveaway so I figured nothing would come of it, but hey, she won it. 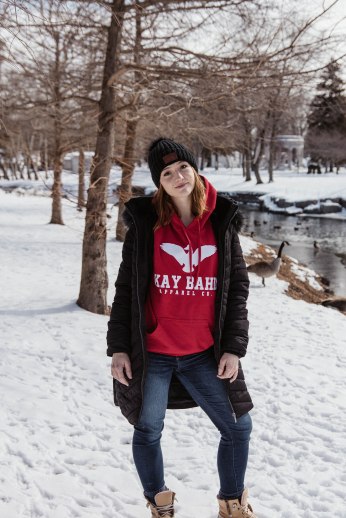 The geese were vicious.

So, we planned a little shoot at the nearby cemetery because Kaila wanted to see her geese friends. She boasted a good rapport with the geese, and I to chimed in, acknowledging that whenever I get close to them, they run towards me! Perhaps the better word is charge…yeah, don’t get too close to the geese, they’re rather protective little buggers.

The two of us hadn’t shot since early January and it had been a minute since we’d caught up, and stories were bountiful. That’s the wonderful part about some friends. I don’t get to see my closest ones everyday, and that’s fine because people are incredibly busy with college and work and other commitments. Kaila and I can pick up right where we left off and catch each other up on the last five or six weeks. Those kinds of people are the ones you want to stick to like glue.

She has a shirt too! 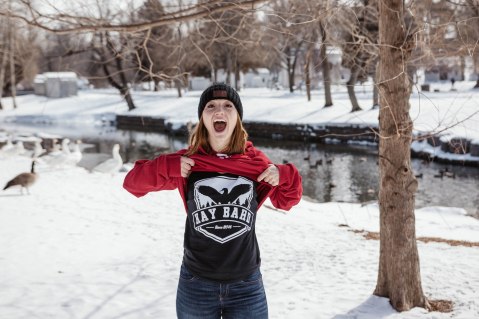 Can she get happier?! 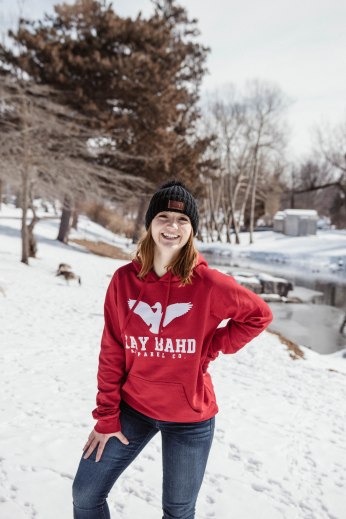 With her geese friends.

Well, getting back to the shoot, Kaila found a little tree seat (yes, a “tree seat” – don’t ask) and plopped down on it. We were basically done because she had to get going (and so did I) but we snuck a few extra minutes out of each other. It’s what friends do! We still returned on time. Gosh, we’re a good pairing. Keep on the lookout for more Kaila as the months go on, she’ll be in at least one more! We have plans to get to a state park once it’s warmer out. Bet ya can’t guess which one! Do it, you won’t.

She found this little tree seat!

Again, hey, if you’re looking for some sweet hoodies or shirts and you live that rural Canadian (or American) rural lifestyle, head on over to Kay Bahd and get yours! Kaila can assure you it’s all comfy – and it looks good too!

See you Bahd’s out there.

Next blog: The second Tips-On-Tuesday! I’m kinda excited for this one!