She’s a photographer at Buffalo State but also has dabbled in some modeling here and there. She did a self portrait series that I absolutely oogled over because the shots came out excellent and she was the reason I did my self-first portrait shoot! That blog is coming in a bit but I’ll give you a sneak peek. It’s funny, for our shoot, we actually planned a whole day that included the coffee shop but we ended up staying there and talking for three hours instead of shooting! Absolutely not a waste of time, sometimes you need those days. And it was certainly enjoyable. 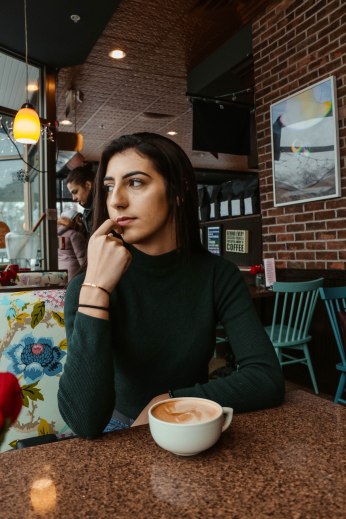 The second perk. The beautiful latte.

Now this cup…this latte might be one of the prettiest I’ve had the pleasure of shooting with. I mean, look at it! In the past, it’s been hot chocolate with whipped topping and chocolate drizzled on top, so that’s almost cheating. But wow, the shape of the cup, the texture, the color; everything together made it so unique. I’ve wanted to go to Perks Cafe for a long time now and I finally did! G was completely down for it which got us both in the best mood. We texted back and forth frequently and I knew it was going to be a good time. 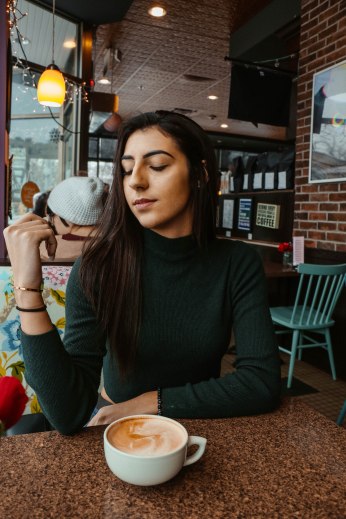 And then the shoot. I of course woke up at 6 a.m (yes, I’m a morning person, even on Saturday’s) to get some work done before Tottenham Hotspurs played. And then the shoot. Or rather…yeah…I don’t even know, it wasn’t really a shoot! We shot for the first 10 minutes perhaps, maybe a little more, but we ended up talking about everything under the cloudy skies. Coffee and photography (mainly photography), prom and lack of prom, college, relationships, and my awesome photography book. I haven’t shown anyone else this book so, G, you’re a special one.

The broken clock on the wall. 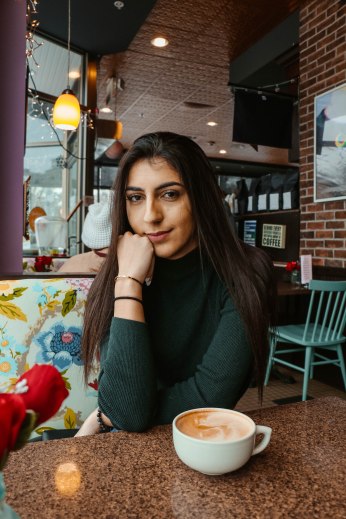 It’s 307 assignments and ideas written by photographers for photographers. It’s easily the best book I own. Each photographer writes down thoughts, ideas, or directions for a class assignment or for the fun of it. I handed her the book and her excitement was unreal. I took a bunch of video on my camera and it honestly was a beautiful thing to watch. I had no idea someone else would get such a kick out of the book! We already have plans to shoot some of the ideas in the book next time!

She absorbed as much of the book as she could and we traded it back and forth, reading passages from the book. It may sound boring to someone reading this but I honestly loved every second of it. The excitement and confusion we got when reading a particular assignment had our minds racing to think of what we could shoot. Then came one of the bigger mistakes I made in my life. And I’m writing it here, so G, it’s in writing here, too!

I told G she could practice her night photography on me. It just came out. I wrote it down on a napkin, dated it, including the time I said it, and wrote my name down. Me. I told her she could photograph me. I’m terrified, if I’m being honest. I know she’ll come away with excellent shots but it’s still one of those terrifying moments! I know a lot about low light photography, so it’ll be a bit of a teaching shoot for me because I want to help her get better. I’m very fluent in Lightroom and offered to edit with her. 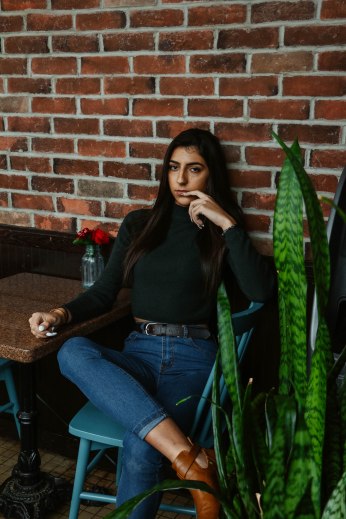 The time abruptly came to an end, and it wasn’t enough. The one part I can hang onto is the fact that before we even got to the coffee shop, she already wanted to shoot with me again. We’d perhaps been in each other’s company for 5 minutes, if even that long. It’ll likely be next weekend. Stay tuned.

And I might be in front of the lens.