After two unsuccessful attempts at summiting two peaks, I finally managed to get to the top of a mountain in New Zealand. And Isthmus Peak is worth every step.

I got a tip from the receptionist at the Makarora Tourist Centre that this hike would be well worth the climb. Tuesday blessed us with a bright and clear day in the mountains after a few days of rain. We drove 50 kilometers through mountains nested along crystal blue lakes, taking in the sights. After reaching the car park, we started on the trail head. We walked on small footpaths through some thick bush for a short time before walking through farmland. Some may relate to this sensation: I could hear Lord of the Rings music playing in my head as we walked. It’s pretty obvious if you ever visit (or have visited) New Zealand – it literally feels like walking through Middle Earth at times.

Lord of the Rings?

Unfortunately, we ran into trouble. Due to the rapid increase in elevation and our initial pace, Maja started having labored breath due to her asthma. We slowed down for her, but Mari insisted that Martin and I keep going. We trudged up further, keeping an eye on the pair as we hiked. Still, the view the entire length of the hike was breathtaking. 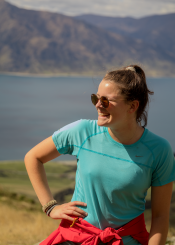 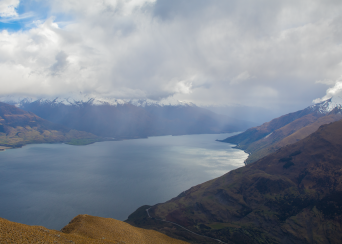 We finally reached a magnificent lookout point with a view of the whole lake in front of us. It was eerily peaceful. Besides the few other hikers clambering up the trail, there was little noise. Just the noise of our breathing, the occasional crunch of gravel and dirt underneath our feet and the cries of birds in the sky. Truly, it was amazing. 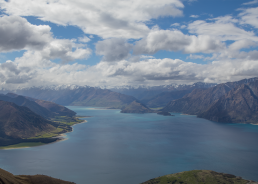 Mari and Maja made the decision to turn back in order to alleviate Maja’s breathing, so Martin and I continued on to the summit. We still had about another hour and 20 minutes until we reached the summit, so we stopped for a quick lunch break. Martin, however, expressed that he didn’t want to kill his legs but wanted to touch snow before turning back. Upon reaching his goal, we parted ways as I continued on towards the summit alone. It wasn’t long before I reached it – and this panoramic view was even better than the first lookout spot. 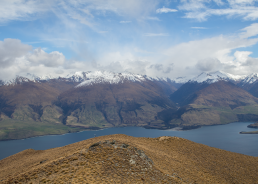 While I sat up there taking in the view and eating the rest of my food, a mountain biker summited, striking his tire on the pole marking the top of the peak. He pulled out a mirrorless camera, and, seeing my own camera, came up and started talking to me. The Kiwi and I chatted all things camera for a solid 12-15 minutes. He offered me some insight into the mystical aspect of using a mirrorless camera over a DSLR. I shot back with my knowledge in lenses before finally swapping portraits of each other.

I didn’t want to head down the mountain; the view was too good to take in all at once. I placed my camera carefully back into my backpack and sat at the top, observing the world around me. A group of ten or so hikers sat huddled together, quietly near the summit pole. The snow-capped mountains rose sharply next to the lake, creating a foreboding but beautiful landscape. Two Germans flew a drone high into the air, capturing the natural beauty. Clouds rested just above the tips of the mountains, creating a perfect picture.

If only there was a way to be among the clouds…