If you’ve never driven across the country…I highly recommend doing it.

It might be best enjoyed with a friend, but honestly, I had so much fun doing it solo. I was on my schedule, so I stopped when I needed to and when I wanted to. And, well, being a photographer, this was a dream I never realized I had.

And now I want to do it all again. Who wants to go with me!?

Oh, also, disclaimer – I did some odd edits on this trip. I edited a lot of these photos to look like faded film photos and I seriously dig the look a lot. There’s a mix of regular and “film-look” photos. 🙂 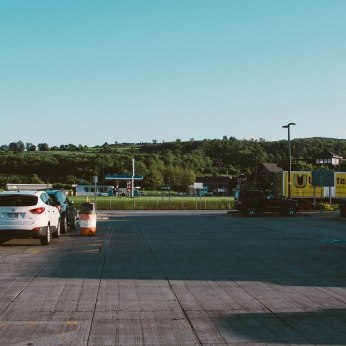 Six days, ten states, four wheels, and one boy in a nearly fully loaded car journeying across the country.

The first day might’ve been the hardest. It was one of the longest days of driving and the first time I left home. I knew I was stopping in Buffalo at a friends house for two nights, so I had some solace there. Still. it’s a daunting task.

I arrived in Buffalo very late that day – I left Massachusetts very late because I didn’t want to go, and frankly, I was terrified. I pulled up to my friend Peter’s house (I actually was in the wrong driveway for a bit…oops!) and everything seemed to cool down a bit.

The next day was great – I got to see two of my really good friends and spend most of the day with them! We caught up on the last few months, had some fun, went out to eat, and watched a movie to top the day off. I also got to see my friend Zoey, who I don’t have a picture of (I think I got one on my film camera but I haven’t developed the rolls yet…so I’ll update this post when I get them developed!). She took me out to lunch in Elmwood at a place I cannot remember but boy, it was good.

Gilles being a goof.

Sunday came around and I went to my church at my favorite church in the world – St. Louis Church in Buffalo, N.Y. It’s seriously a must see if you’re in Buffalo. These photos don’t do the church justice but I did my best.

Unfortunately, I needed to hit the road again. The next stop was Michigan City, which, oddly enough, is in Indiana, not Michigan. Yeah, I know, blew my mind, too. Anyways, it was a rather gloomy day for most of the trip but it made for some excellent photos. I also left Buffalo very late and wound up getting into my hotel at around midnight – I drove through the night and boy, it absolutely down-poured. I’d never been so scared driving. I’d heard stories from my Dad and grandparents talking about the rain storms in the Midwest and had experienced one a few years back, but this time I was driving with nearly everything I owned in complete darkness. Absolutely terrifying. 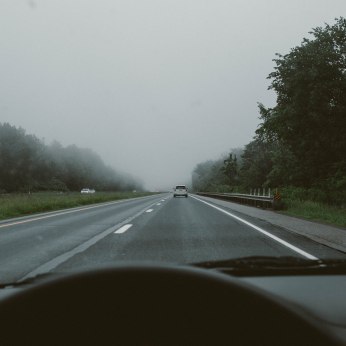 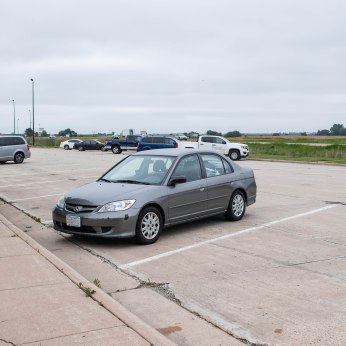 This was a cool day. I crossed the Mississippi River (that was so fun to type, wow) and found the world’s largest truck stop. See, on the days where I was starting from hotels and not from friends’ houses, I got to get out and take a lot more pictures. But, let me be the first to tell you – Iowa is flat. Like, there’s nearly no terrain, and it seriously couldn’t be prettier. It’s insanely beautiful out there!

My first stopping point was the Mississippi River (amazing again) – sort of. I got off the I-80 (yes, I switched from the I-90 to the I-80) and drove down a little dirt road. I must’ve looked insanely lost – a Massachusetts car going down a dirt road in Illinois – but this was intentional. There was a road closure ahead, so I turned left to continue onwards to try and find the river. My GPS was going insane, and finally I reached a stop sign. Well, about five feet of a stop sign. The rest was submerged because – yes, you guessed it – the Mississippi flooded. And that’s why the road was closed!

Anyways, I continued onward, albeit a little disappointed, but those were the cards I was dealt. It got far better for sure. I found the largest truck stop in the world! And it was awesome!

From there, I continued to my destination – Omaha, Nebraska. Whenever I hear Omaha, I can’t stop thinking about Peyton Manning, when he played for the Denver Broncos. The Broncos ran a play called Omaha and Manning would always shout “OMAHA” whenever they needed to change the plan. So, I hit OMAHA relatively early in the evening (must’ve been 6pm or so) and, by the grace of God, I narrowly missed a fatal accident. Had I not taken a bathroom break at a rest stop, or stayed a little bit extra at a gas station finding the right music, that could’ve been me in the crash. And when I say narrowly missed it, I mean I missed it by a mere five, seven, ten minutes maybe? I said a prayer and carried on.

I arrived a bit later to my stop for the night, the house of some family friends. They were incredibly sweet, welcoming, and grilled me with questions, all of which I was happy to answer. My sister stopped at their place a few years back when she did a cross country road trip, and they were happy to meet me! We had a lovely steak dinner with potatoes and vegetables and pasta salad – it’s honestly exactly what I figured my Dad must’ve eaten, having grown up in the Midwest himself.

The next morning was awesome. Eggs, bacon, toast, fruit (I can’t remember what kind) and they were nice enough to pack some food for me on the way. We made wraps, packed some leftover pasta salad and other food, Ziploc bags, paper towels, silverware, the kitchen sink..basically anything you can think of, they packed with me. She was so kind!

I nabbed a few pictures while I was there, took a selfie with my kind hosts to send to my mother, left to find gas (which was insanely cheap) and continued on my way.

Down the street, Omaha, NE.

Nebraska has a bit more terrain than Iowa. There’s nothing quite like seeing views like this after driving up a big long hill, racing eighteen-wheelers to the top. 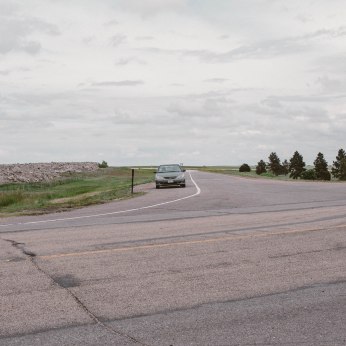 A truck pulled over to see if I was okay. Just taking pictures!

I had a fair amount of time to stop and get out on this day as I headed towards Cheyenne. It rained off and on for the day, which was okay (except when it got intense). I hadn’t ever had the time or space to get out and see signs welcoming me to each state – I wanted to compile all my photos of me entering states – and I finally got out when entering Wyoming. 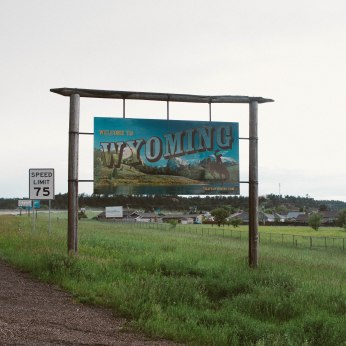 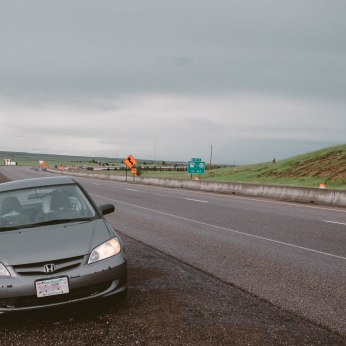 On the edge of Wyoming.

I drove right into a huge storm. Again. But this time, I was a little more prepared! It didn’t last too long but it again was a huge onslaught of heavy rain. Absolutely massive rain drops hit my windshield! I holed up in Cheyenne for the night and went out for a little walk to take some pictures of the area.

The last day of driving. I got up really early, packed up my little room and was on the road by 7:30 am (I think – it was a very early start). I was ready to get to Salt Lake City, my destination that day, and I wanted to try and get out and see a bit of the city on my first day!

I found a sign pointed towards Buford, which I knew I wanted to get a picture of. One of my family’s favorite shows, Phineas and Ferb, has a character named Buford and he’s insanely funny. I knew I had to grab it! 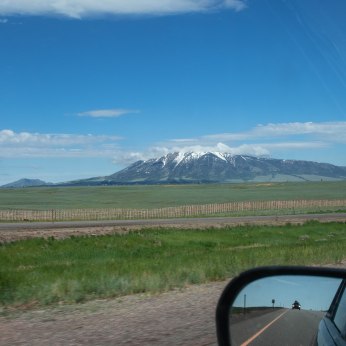 So many of the roads looked like the one above – endless straight lines, going of into the distance. You can literally see for hundreds of miles, especially on clear days like this. I had my cameras out and next to me so I could grab photos like this. All of them were completely blind shots (and that goes for the whole trip) because I needed to focus on the road, so before I left, I made sure my settings were correct for a quick grab. Every now and then, especially on this day, I got out to grab photos because I knew it was my shortest day, and I left super early for that exact reason.

I got out and snapped three pictures standing from the same spot. The result is below. 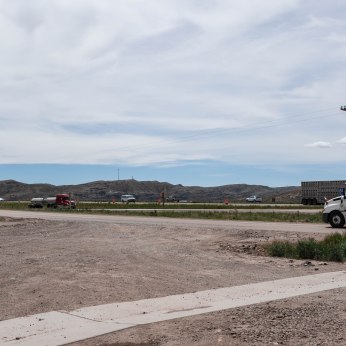 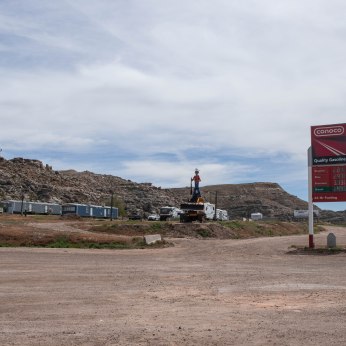 I have to say, the drive from Cheyenne to Salt Lake City was definitely the most fun. Not only was the speed limit 80 MPH (OH YEAH!) but the landscape changed dramatically. It went from rolling plains to distant mountains to being among the mountains. It was seriously beautiful.

And some more beauty (the speed limit was either 75 or 80, gimme a break).

Then, finally, the sign I had been waiting for. I finally made it. 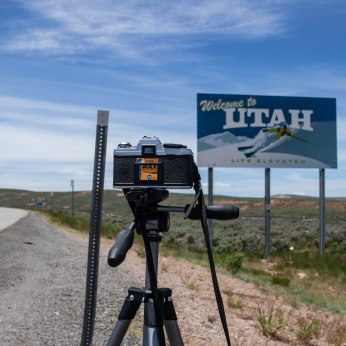 I traveled a bit further to the welcome center and got out, grabbing more photos. I was beyond excited to have finally arrived in Utah but at the same time, it was a little sad. It began the start of my professional life, and I knew zero people, so it was rather scary. But, I had made it this far. 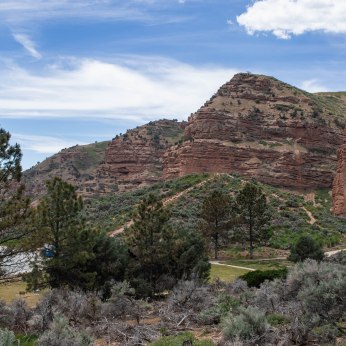 This is what I had waited for. I was scared, but excited. I got into my hotel and immediately sprawled out, exhausted from the day. I eventually got out and did some driving, and met up with a youth group that met that night. My mother had done some research and found they were meeting at a bar that night – cool! I met some awesome people there, and even a person who graduated from Pingree High School in – guess where – Massachusetts. AND. He happened to know someone that my brother knew and had a sister my age who I was good friends with. Literally, what are the odds, right?

It was honestly a very fun time getting to know everyone – I told them all I had gotten into Salt Lake just hours earlier and everyone seemed genuinely intrigued with my journey and stories. It was absolutely awesome!!

That ended my night, and thus my journey across the US.

You can bet I definitely slept well that night.

Geez, if you made it all the way to the end here, I commend you. Let’s do a virtual high five because wow, that’s the longest blog I’ve written (sorry for any spelling errors…). Alright, 3…2…1…high five *slap*AWESOMEEE!!!!

Okay, I need to go now, but hey, we’ve got some fun blogs on the way. 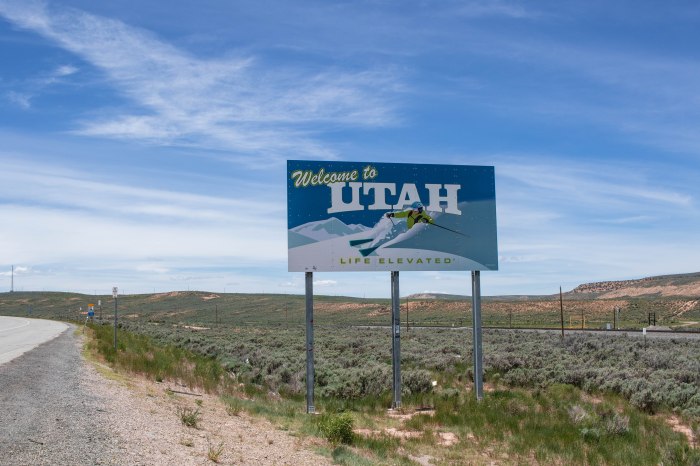 Next blog: I met a guy at church and he took me rock climbing!?

3 thoughts on “My Roadtrip From Massachusetts to Utah”